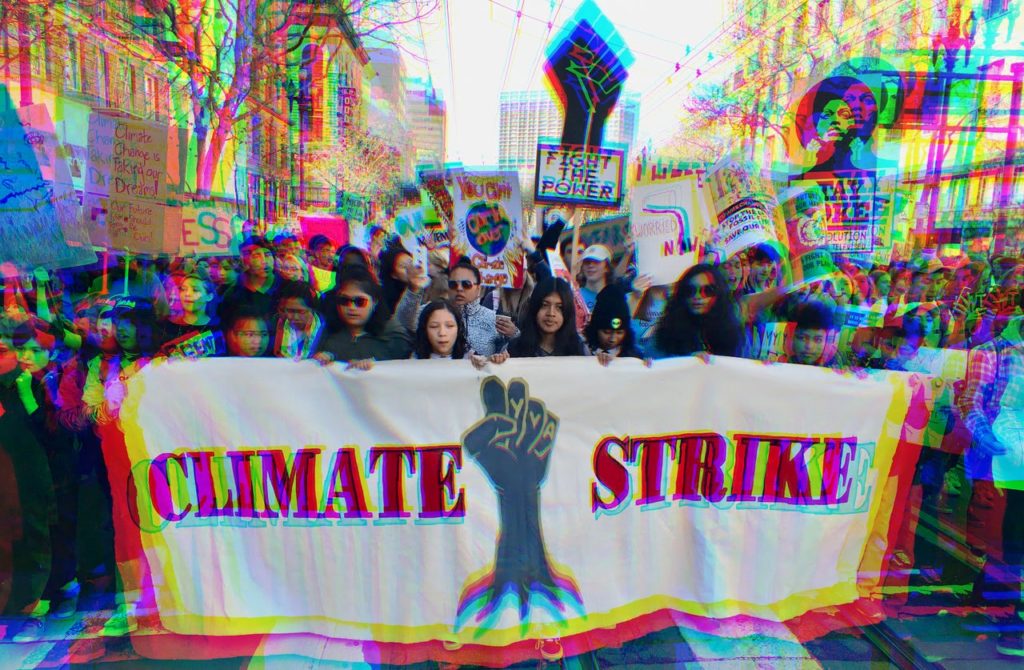 One impressive thing about the new climate movements Fridays for Future (FFF) and Extinction Rebellion (XR) is that they do try to take the warnings of climatology seriously. Not only more seriously than ruling elites, but also, arguably, more seriously than the older generation of climate activists associated with the likes of Environmental Defense Fund, WWF, Greenpeace and the Climate Action Network.

Such organizations wasted two decades pushing climate policies that they imagined capitalist elites might accept (carbon pricing, energy “transition” schemes involving accelerated extractivism, and so on). From early on, it was evident that these policies could have no climate benefits whatever. Equally, they tended to alienate many of the grassroots movements most needed for a more powerful global climate alliance. Trapped by orthodox economic thinking, mainstream environmental organizations from the global North had failed to develop either their analysis or their organizing.

So campaigns like FFF and XR look to be embarking on a welcome return toward fundamentals. Nevertheless, they continue to be constrained – in a quite understandable way – by certain misunderstandings of what the climate crisis is and what is needed to mobilize politically around it. Ironically, this has come about partly as a result of the unexamined relationships that such movements maintain with the very climate and energy sciences that they rightly take so seriously.

There may be no way of putting this gently. The issue is not that movements like XR and FFF, like their more mainstream predecessors, tend to be largely white in their constitution, history and culture. That is something that they are obviously aware of and already struggling within their efforts to reach out and join themselves to broader-based climate movements.

The bigger challenge is what such movements plan to do about the fact that the main concepts that they work with at present – climate and energy, for example – are also white. And not only white, but also gendered and class-biased.

Here it may be necessary to pause for a moment. Decades of scholarly work notwithstanding (e.g., Smith and Wise 1989, Caffentzis 2013, Edwards 2013, Taylor 2015, Lohmann forthcoming), the idea that such concepts might be white still shocks many Western intellectuals.

Faces might be white; cultures might be white – but what could it mean, many white climate activists wonder, to say that today’s dominant concepts of climate and energy are also white? Surely those greenhouse gas molecules migrating across the border of a “climate system” computed by Global Circulation Models are colourless, no? And how could energy be anything but a universal, nonracial, genderless substance craved by generic humans from time immemorial – even if it did happen to originate in the ways 19th-century patriarchies and empires organized the mass interconvertibility of motion, heat and electricity, together with the resulting waste, across broad peasant, Indigenous and urban territories in the service of industrial exploitation (Hildyard and Lohmann 2014, Daggett 2019)?

Yet as the news about structural racism filters slowly toward the mainstream amid daily bulletins about algorithmic bias, worldwide George Floyd uprisings, and Covid-19 mortality patterns transparently shaped by centuries of white supremacy, now may be a good time to put in a bit of work to try to understand better the racial, patriarachal constitution of the climate and energy concepts that climate movements have inherited.

The Jamaican analytic philosopher Charles W. Mills (1998) writes of the “wonder and complaint” that his field provokes among minorities: not so much because so many academic philosophers have white faces, but because the subject matter itself is white. And more importantly, because so many white philosophers have a hard time even “seeing” the biases that their theoretical canon perpetuates (Eze 1994, Oyewumi 1997), or perceiving the prejudices implicit in the field’s habitual “reliance on
idealization to the exclusion, or at least marginalization, of the actual” (Mills 2005: 168). Feminists know this as the “just add women and stir” approach. Because the philosophical canon is imagined to be unraced and ungendered, any concerns about patriarchy – or white supremacy – are supposed to be addressable just by getting more women – or Blacks – to recognize and contribute to it.

Is it too provocative to apply these lessons to climatology as well? Last April, a spokesman for XR America told his colleagues that we “don’t have time to argue about social justice … If we don’t solve climate change, Black lives don’t matter” (Dembicki 2020). Other leftist white activists and academics from both the US and Europe chimed in that Black Lives Matter, #metoo and other movements, important as they were, were in the end just playing around with “identity politics,” whereas the climate crisis required a more “universalizing” stance to organize a “unified, powerful, effective and sustained” movement capable of “getting past our differences” and “transforming the socio-ecological relations in which we live.” In the background, Bill McKibben continued to insist that in understanding the need for climate action, “350 is the most important number in the world” – apparently more important than, say, the number of humans and nonhumans sacrificed over the years for fossil fuel extraction and pollution or the number of nations subjected to imperial rule for the sake of cheaplymechanized labour (Malm 2016).

Not every climate activist in the global North may be aware of the extent to which such discourses are the object of lampoon and ridicule among climate movements in the global South. Which is why it might be worth spending some time exploring the deeper, climatological roots of what they often find problematic.

In 2014, Sir John Houghton, founding member of the Intergovernmental Panel on Climate Change, gave an interview explaining that UN climatologists were not permitted to mention the carbon locked up in fossil fuels in their analysis of climate change, but only carbon that had become more mobile in the form of CO2 (Marshall 2014). To follow what happens when carbon atoms cross one of the internal borders of the earth’s geophysical system into the atmosphere is “science,” Houghton said. But to analyze their movements toward that border “is not a science question.” In other words, climatology is not allowed to ask why the climate is changing any more than a Donald Trump appointee is allowed to ask why Guatemalan slum dwellers might be compelled to jump on the train known as La Bestia in an attempt to reach the US border.

The consequence of this scientific methodology is to treat the climate crisis in more or less the same way that the far right treats immigration. If the problem is too many immigrant molecules of a certain kind, then any solution must naturally start with controlling immigrant numbers at the border.

This might help suggest why a Guatemalan climate activist, say, might find herself somewhat bemused by a white US climate activist’s earnest advocacy of carbon prices, carbon-neutral development, carbon-zero renewables, carbon-restrictive Green New Deals, carbon-centred Natural Climate Solutions or any other approach that hierarchically identifies the primary problem as immigrant carbon dioxide molecules rather than historically-rooted patterns of capital accumulation, white supremacy, unrelenting imperialism and ruthless patriarchy. Or that sees climate justice as a matter of starting with carbon controls (never mind what authority might be appointed to do the controlling) and then “stirring in” some green jobs or a bit of equitable energy distribution, without considering what that energy actually consists in.

Does that mean that Northern climate activists should reject, refuse or try to flee from their concepts of climate and energy? Not at all. That would be as fruitless as white anti-racist activists trying to reject, refuse or flee from their own whiteness (Sullivan 2014, Alcoff 2015). It would be to disrespect that very climatology and 19th-century energy science that networks like XR and FFF have justifiably committed themselves to taking so seriously. Because it would be to airbrush out the troubled histories of those sciences as well as to dismiss their capacity to change and become more scientific.

Instead of climate activists rejecting outright the white climate and white energy bestowed on them by their tradition, then, the point is to decide in a more self-aware fashion what kind of relationship they need to have with them, as objects in the making.

Like any relationship, that relationship is not given for all time. It is something that will always need work. As any social anthropologist knows who has ever joined discussions of climate change in places like Sierra Norte de Puebla (Smith 2007), Molo in West Timor, or the highlands of Scotland, there will always be other climates and other energies in dynamic relations with the capitalist climate and energy that up to now have dominated the world view of most Northern climate agitators. Helping to bring these practices into a less hierarchical dialogue with one another might be a first step toward building global climate movements that are stronger than those the past twenty years have witnessed.

Caffentzis, G. 2013. In letters of blood and fire: work, machines and the crisis of capitalism. Oakland: PM Press.

Dembicki, G. 2020. ‘A debate over racism has split one of the world’s most famous climate groups’, Vice, 28 April, https://www.vice.com/en_us/article/jgey8k/a-debate-over-racism-has-split-one-of-the-worlds-most-famous-climate-groups.

Eze, E. 1994. The Color of Reason: The Idea of ‘Race’ in Kant’s Anthropology, in K. M. Faull (ed.), Anthropology and the German Enlightenment: perspectives on humanity, 200-241. London: Bucknell and Associated University Press.

Malm, A. 2016, Fossil capital: the rise of steam power and the roots of global warming. London: Verso.

Marshall, G. 2014. Don’t even think about it: why our brains are wired to ignore climate change. New York: Bloomsbury.