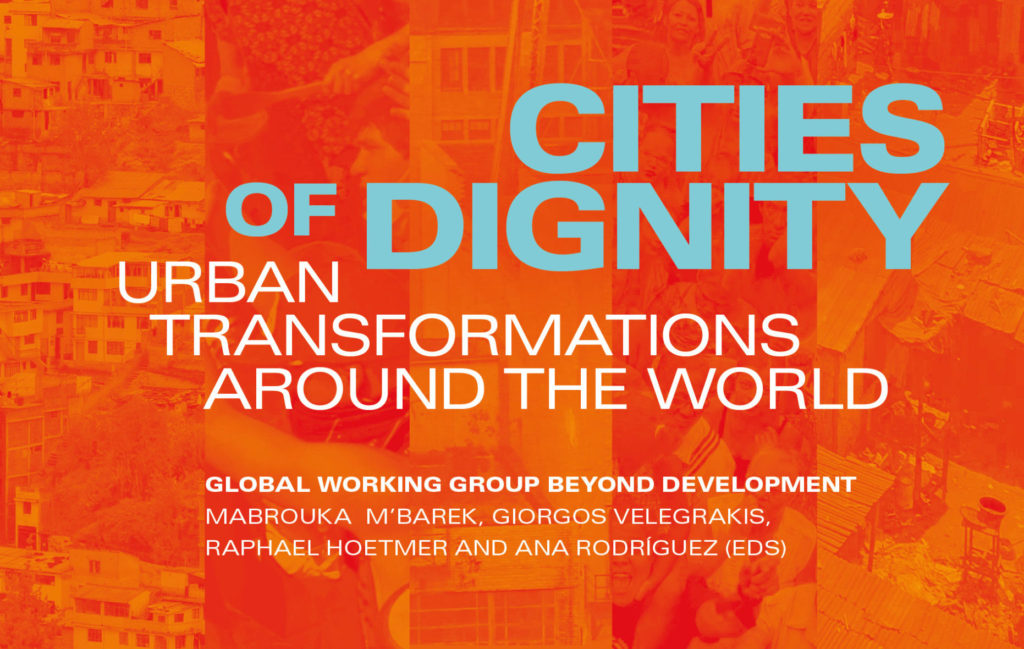 Participants of the Global Working Group Beyond Development are pleased to announce the launch of their third publication: Cities of Dignity: Urban Transformations Around the World. The book, written by movement-based authors, was presented at the Vienna 2020 Degrowth Conference on June 1st.

One of the main challenges that strategies for social-ecological transformation are facing today is the fact that a majority of the world population lives in cities, which can be considered structurally unsustainable spaces. The capitalist growth imperative has forced increasing numbers of former peasants from rural areas to move to big cities to sell their labor force or get into informal markets. Cities are the result of a variety of historical processes, shaped by capitalism and imperialism. The process of monopolistic accumulation has led to the centralization of political and financial power in administrative centers in the Global North focused on ruling and controlling populations. This has led to catastrophic results of inequality worldwide, uneven material conditions for existence, increasing militarization, police violence, racism, accelerated dispossession, gentrifications, and an almost irreversible ecological crisis.

Lately, the crisis of civilization, exacerbated by COVID-19, has shown how cities, usually understood as the sites where people move to in order to live ‘successful’ lives, where they can realize consumption and have easier access to many public services than in the countryside, have become deadly traps of contagion. Throughout the world, people who had the opportunity to do so even moved back to their places of origin in the countryside.

It is thus crucial to discuss how cities can be transformed from being sites of extraction and dispossession of rural areas to become sites where, for example, food and energy sovereignty are put forward. How they can be transformed, from being sites for the realization of added value in real estate for transnational capitals through violent land speculation, to being habitats where the dwellers practice self-determination and decide themselves democratically over the territories they inhabit.
Cities of Dignity begins with an analysis of the political economy of urban commons (Chapter 1) and a survey of existing transnational initiatives and trans-solidarity platforms in support of radical urban transformations (Chapter 2). The book presents seven cases of such urban transformation toward more democratic, sustainable, socially equitable and antipatriarchal relations from below in a series of case studies: the San Roque popular market in Quito, Ecuador (Chapter 3); the resistance of Izidora community in Belo Horizonte, Brasil. (Chapter 4); Black-led urban commons in Birmingham, Jackson, and Detroit in the U.S. (Chapter 5); the resistance of slum dwellers of Maroko and Mokoko in Lagos, Nigeria (Chapter 6); the communitarian currency experimentation in Kenya (Chapter 7);  the 15th Garden food sovereignty network in Syria (Chapter 8); and the self-determination and organization of slum dwellers in Bhuj in India (Chapter 9). Many important lessons for social-ecological transformation toward societies that leave the growth imperative behind can be drawn from these seven urban experiences (Chapter: Collective Reflections).