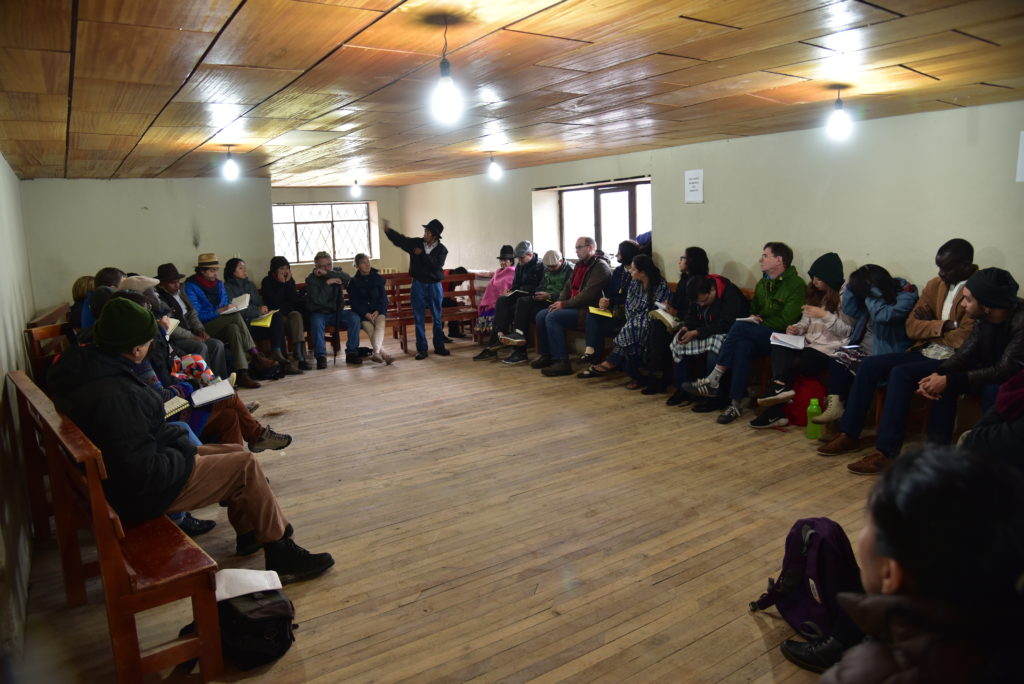 International conference “World in crisis. Alternatives from the five continents “

The graduate program of Latin American Cultural Studies from the Universidad Andina Simón Bolívar in Quito Ecuador, in cooperation with the Rosa Luxemburg Foundation organized the international conference “World in crisis. Alternatives from the five continents ” with participants of the Global Working Group Beyond Development on May 18th 2017.

While in France the extreme right is encouraged by the implosion of political and institutional frames of reference, the winners of globalization try to save ‘the system’ and a new left finally incorporates ecological aspects, following socio-ecological struggles that have influenced its visions.

Mauro Castro, Polytechnic University of Catalonia and Collective the Cooperative Hydra, Catalonia
Seizing Institutions: The Barcelona Communist Municipal Movement
The victory of “citizen platforms” in the 2015 municipal elections in Spain has been a milestone of electoral democracy in the recent political history of Europe. In this presentation some analysis keys about Barcelona en Comú, a movement-party that has governed the city of Barcelona for 21 months, will be exposed.

Table 2: Asia 12h20-13h30
Mary Ann Manahan, Focus on the Global South, Philippines
In Defense of the Commons: Resistances and Alternatives in Southeast Asia Land and resource appropriation, commodification, and privatization are major challenges for popular and social movements in Southeast Asia that practice shared access, collective use and governance of natural resources as a common form of tenure. The defense of these commons, however, opens spaces for social mobilization, resistance and the construction of alternatives.

Maduresh Khumar, National Alliance of People’s Movement, India
Social movements and resistance to capitalist expansion in India. With the current market-based neoliberal growth strategy, India’s 1.2 billion people will soon be faced with a massive ecological and social crisis. The talk will focus on the resistance of various social and environmental movements, the State’s response and the challenges of articulating an alternative discourse to the dominant forms of development.

Edgardo Lander, Central University of Venezuela
Learning from the progressive cycle in Latin America. This paper will present a reflection on what the experience of the so-called progressive governments has been based on a key question: To what extent have these experiences brought us closer to overcoming capitalism and have opened gaps in the direction of exit to the deep civilizing crisis that humanity faces today?

Elandria Williams, Highlander Research and Education Center, USA
Building transformative solutions in the belly of the beast: socio-economic and organizational dynamics in the southern United States. The United States faces a frontal right-wing attack that is not limited to Donald Trump, but is part of a cycle related to the 400-year heritage of colonialism, imperialism and capitalism rooted in genocide and slavery. In this moment of setback, the left in the United States is fighting and laying the foundations for a reconstruction based on the principles of community self-government, the solidarity economy, reparations, and sustainable and healthy communities.

Table 4: Africa 17h00-18h15
Mabrouka M’Barek, Middle East Institute Washington D.C./ Tunisia
Perspectives to six years of the Arab spring. Mabrouka will give an overview of the current situation in the Arab region, focusing on the Maghreb and Yemen. Several cases of civil resistance will be discussed in the areas of climate justice, economic justice and transitional justice.