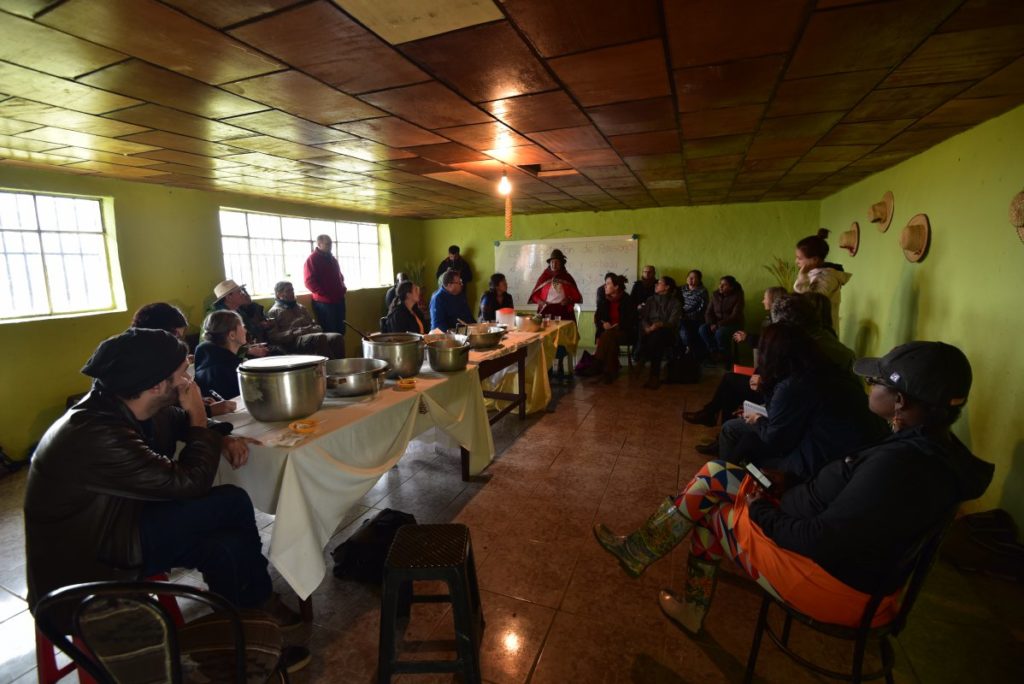 FROM STOPPING THE MACHINES OF SOCIO-ECOLOGICAL DESTRUCTION, TO THE BUILDING OF ALTERNATIVE WORLDS: RETHINKING OUR STRATEGIES FOR SOCIAL CHANGE

From 12th until 19th of May the Global Working Group Beyond Development, hosted by the Brussels office of the Rosa-Luxemburg-Stiftung, held its second meeting in Ecuador, Latin America, in order to collectively analyze the opportunities and challenges, as well as the practical strategies, for the construction of multidimensional alternatives which would respond to the current civilizational crisis to which capitalism and its economic, social and cultural dynamics have led.

The second meeting of this group of thirty engaged researchers, activists and popular educators included a public conference at the Universidad Andina Simón Bolívar in Quito, a three day workshop and a field visit to the municipality of Nabón in the southern Azuay province of Ecuador, aimed at learning from the experience of building Buen Vivir or living well from the bottom up, as it has been practiced by the communities and associations of Nabón with the support of the alternative local government led by two female mayors of the indigenous Pachakutik political movement, during four successive periods of government.

The discussions of the group were also inspired by five case studies on the construction of multidimensional alternatives in different regions of the world: the self determination of the local people of the village Mendha Lekha in India; the community resistance against oil extractivism and the closely associated colonial state in the Niger Delta in Nigeria; the current building of an alternative municipalism in Barcelona, Spain; the creation of social urban alternatives in the midst of economic crisis in Greece; and the process of the Bolivarian revolution, later labeled as Socialism of the 21st century, in Venezuela.

The meeting was marked by a particularly critical historical context that underlines the urgency of the debate on multidimensional alternatives which are able to address issues of class, gender, race, coloniality, state power and sustainability. Climate change and ecological destruction put the future of humankind at risk, whilst extractivism is expanding its grip on livelihoods around the world, and an “imperial mode of living” based on consumerism and individualism without limits has been installed in elites and spreads in middle classes around the world. The global (counter-) offensive of a confluence of right wing populism, religious conservatisms of different kinds and aggressive capitalism have put the global left on the defense, whilst social movements are threatened by different forms of state repression, criminalization, and private violence in new corporate-state formations.

The group agreed that these tendencies are the effects of a civilizational crisis, rooted in patriarchal, colonial and imperial capitalism and its predatory relations with nature, which are being further promoted by the development paradigm. Radical transformation is imperative and urgent, but at the same time, it is precisely social movements proposing alternatives as much as different modes of living which persist or are constructed in different local contexts as alternatives that are under attack.

Learning from our experiences

It is necessary to learn from the last decades of social mobilization, in which popular insurgency and the building of constituent power several times destabilized the status quo, particularly in Latin America, Southern Europe, West Africa and the Arab World. However, as many of these efforts prioritized taking control over the State at the national level as their main strategy, the posterior moment of their institutionalization and government ended in the best case in a more limited change then was hoped for, and in other cases in clear disappointment and setbacks.

In Latin America, the results of these processes have been particularly contradictory in what regards the transformation of economic structures and modes of production, the relationship with indigenous autonomies and the postulates to build plurinationality as an alternative to the monocultural nation state and to implement gender justice. Also, the predatory relations with nature deepened under the influence of progressive governments. One of the lessons of this cycle might be that politics as we know it is not enough for the kind of transformation the world needs. At the same time, the political legacies, instruments and analytical horizons of the global left seem to be insufficient to meet the contemporary challenges, as they were developed to overcome a very different capitalism in the XIXth and XXth centuries.

New strategies and challenges for the Left

The current context presents particular challenges for the legacy of the Left, as its role in emancipatory politics has grown increasingly ambivalent due to its difficulties to overcome state- and class-centered, productivist and economicist politics which often still conceive themselves as vanguardist. At the same time, the global left remains the principal reference of organization and action against capitalism in the World, so that its refoundation seems necessary for multidimensional transformation.

This refoundation not only requires the recuperation of the own plural history of the lefts and its legacies beyond the currents that historically became hegemonic. It also needs to engage in a critical dialogue, a learning process and constructive alliances with indigenous, feminist, Gandhian and other emancipatory movements beyond the Left. This implies the necessity of intercultural dialogue regarding grammars of social transformation.

The current historical moment implies different temporalities of transformation which are best met by different, eventually complementary political strategies. In the short term there is a need to stop the accelerated ecological, political and social processes of destruction and dispossession. Thus strong social movements of resistance all levels, local, regional, national, continental and global are necessary and this struggle will require a multitude of strategies including different approaches toward the state. These include the politics of left political movements or parties which dispute the legal and institutional conditions for transformation within the framework of the State.

Strategies of prefigurative politics have so far been most successful when bound to specific territories with significant ranges of autonomy from national state institutions – with local governments, accountable through mechanisms of direct democracy, sometimes serving as allies as in the cases of Nabón in Ecuador and the municipalism in Spain. Making use of the own instituent power in order to preserve existing commons or create new ones and thus de-link from the logics of the globalized capitalist world market emerged as a path forward for the deepening of democracy and self-determination, as well as the transformation of relations with nature, depatriarchalization and decolonization.

It is a matter of further debate and practice, how these and other strategies combine for a radical and multidimensional transformation that achieves profound cultural and political change and can put an end to exploitative economic and social relations.

Finally, responding to the purpose of a global working group, the debates addressed the need of rethinking the concepts and traditions of solidarity and internationalist relations. Here, emphasis was made on the need of overcoming money-centered and paternalistic logics of aid or the tradition of supporting specific struggles abroad, which are abandoned when another new struggle comes up. The alternative would be engaging actively in the transformation of the own sociopolitical context, while taking into account the effects that this context necessarily generates elsewhere on the globe, and engaging in reciprocal and horizontal interpeoples relations which allow intercultural dialogue and experience-based learning processes.