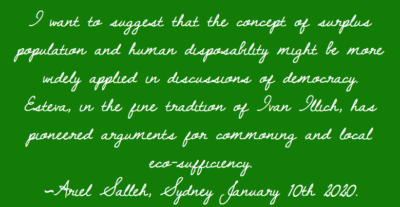 On reading Esteva’s ‘Beyond the Democratic Nation-State’

Gustavo Esteva writes with the sincerity and simplicity of one deeply experienced in the politics of everyday life. He rarely calls on academic terms, unless there is good reason. So his essay opens by tracing the idea of democracy from Ancient Greece, through the Treaty of Westphalia, French Revolution, and on to the US Constitution. At every turn, he shows the practice of democracy has been incoherent and exclusionary of class, race, and sex-gendered others. But as the article continues, Esteva does visit a couple of philosophic themes that may be worth looking at more closely.

Esteva explains that the class structure of neoliberal capital is characterised by what Giorgio Agamben has called a ‘surplus population’ with no place in the economy. This precariat is a global labour class who cannot labour. But a further class of disposables, beyond Agamben’s original focus, is not even designated a ‘class’ in Left analysis. This is because it is not seen as part of the production sector. Women worldwide mainly inhabit the re-production sector – and women as bodies are regularly disposed of.

In the small affluent nation of Australia, an average of one woman is murdered each week in the home by her life-partner. In India, young men often follow a gang rape by incinerating the woman’s used body. In Argentina, the law forbids abortion even if the mother is too ill to carry the child to term. Her life is disposable; the newborn is not. The same logic applies to commercial surrogacy ‘womb rentals’ entered into by poor Thai women. Again, the body of the prostitute provides men with the convenience of disposable sex.

The point of these remarks is not to criticise Esteva in any way at all. He is rare among radical thinkers for his sensitivity to the international epidemic of violence on women. Rather, I want to suggest that the concept of surplus population and human disposability might be more widely applied in discussions of democracy.

A second academic theme introduced by Esteva is the subtle yet authoritarian governance by ‘the dispositive’. As Agamben would say: ‘anything that has in some way the capacity to capture, orient, determine, intercept, model, control, or secure the gestures, behaviors, opinions, or discourses of living beings.’

A case in point could be the privately funded Earth System Governance project, administered from Lund, and aiming to rationalise environmental law so as to administer it through new transnational state agencies. Or for another example, consider the ambitious 2015 United Nation’s Sustainable Development Goals, which are full of good intentions, yet embedded in the ecologically contradictory eurocentric premise that global economic growth is a precondition for ‘the good life’.

Esteva points to a further dispositive in the form of the United States’ project for the full militarisation of daily life by means of the Internet of Things. This involves people becoming internet dependent for the management of every conceivable activity from baby monitoring to refrigerator defrosts. Thousands of space satellites, some already in place, will furnish 5G telecommunications technology in this classic instantiation of the dispostitive. There will be routers along every street servicing homes and electric cars; and trees may need to be removed where these interrupt the weak 5G signal.

The Internet of Things as latest incarnation of ‘progress’ will call for a massive increase in mining and industrialisation; a rise in energy consumption and global warming; other ecological and human health impacts of 5G technology are contra-indicated; there are privacy implications; and whole societies will be vulnerable to hacker attack. In deliberating on the nature of 21st century democracy, the Working Group Beyond Development might give serious attention to these political impacts of information technology.

By contrast, Esteva, in the fine tradition of Ivan Illich, has pioneered arguments for commoning and local eco-sufficiency. And he enjoins the ‘global tapestry of alternatives’ project called for by recent post-development thinkers. As Esteva says:

Instead of trying to construct dispositives or organizations of national or international scope, autonomous initiatives take care of what is within their reach. They construct collective and communal agreements that recover a sense of limits and proportionality. They are increasingly certain that global thinking is impossible. Only destruction can occur on a global scale.

Ariel Salleh is an Australian sociologist in the Department of Political Economy at the University of Sydney who writes on humanity-nature relations, social change movements, and ecofeminism.