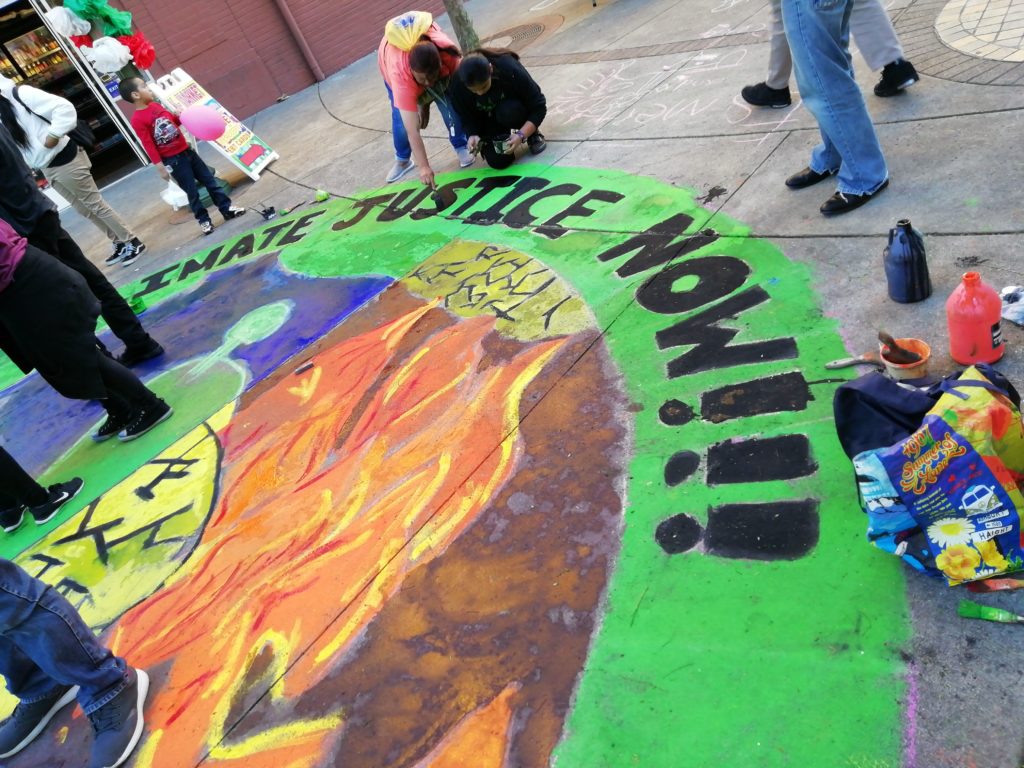 Overcoming crises of representation? Arts in anti-coal struggles in Colombia and California

Data collection on environmental conflicts – including coal conflicts (Roy 2018) – has emphasised the role of communities in environmental defence and in promoting sustainable, just transformations. The ubiquitous use of artworks (e.g. paintings, music, films) in environmental conflicts plays a role, triggering cognitive processes as well as value and behavioural changes (Steyerl 2010). Existing literature about artistic activism ranges from topics dealing with ideological controversies, with artists defying neoliberalism and/or authoritarian powers, to embodied representations of unfairness, emphasising victims’ perspective. However, the literature on environmental conflicts, which has not systematically mapped and analysed these materials, neither attempts to theorise conflicts in which media and politics interact (Hutchins/Lester 2015, Veneti 2017), nor critically examines popular culture (Cultural Politics 2018).

Our case studies show how socio-environmental claims and/or transformative or restorative initiatives in anti-coal struggles are voiced and promoted through arts and cultural expressions. We emphasise the democratic aspect of collective self-determination and representation in two emblematic cases of coal-related conflicts, in Colombia and the United States.

Voicing discontent in Macondo – arts vs coal in Caribbean Colombia

Large-scale extraction of coal through open-pit mines in the Caribbean region of Colombia started in around 1975. Since then, coal mining has led to land grabbing, hydro-morphological alterations, air and water pollution and has transformed regional economic practices and livelihoods. Coal mining has threatened the food sovereignty of peasants and fisherfolk, and also impacted health to the extent of necessitating the relocation of several indigenous and Afro-descendent communities. The coal extracted in Colombia (around 80 million tons per year) is exported to North American and European markets, resulting in major impacts of coal transportation as well, both by train from extraction sites to seaports and by ship for deliveries overseas. The private companies in charge of these coal-mining operations, which are backed by the Colombian government, include large corporations such as Anglo American, Glencore International, and BHP Billiton and Drummond (Cardoso 2015).

In a geographical context largely shaped by the violent repression of civilians, and attacks on human rights, especially against activists and community leaders (The Guardian/Global Witness 2018), open expressions of social and political discontent are uncommon in the Caribbean region of Colombia. “Yet here people do not complain” is a frequent way of ending conversations about examples of injustice or impunity in the area. However, a closer look reveals that the vibrant cultural and artistic repertoire of that highly creative land makes plenty of references to such injustices. First and foremost, actors opposed to the impact of coal mining have harnessed films, paintings and music to bolster their attempts to bring about change.

For instance, the photo reportage Forgotten in the dust of northern Colombia highlights the malnutrition and deaths of women and children in particular among the indigenous Wayuu people in la Guajira, Colombia. The photographer sees coal mining as the cause of their extreme marginalisation and creates a visual narrative that denounces issues of corruption and neglect that would otherwise be spoken about, but rarely seen (Filippo Rosso, N. et al. 2017).

Similarly, the documentary film El carbón de Colombia, quien gana y quien pierde (Colombia’s coal: who wins and who loses?) links the processes associated with international coal mining and use to local impacts suffered by communities where coal is extracted and transported. Social justice organisation Tierra Digna produced this documentary by involving affected communities in the various stages of the film’s production and distribution, giving them a chance to directly voice their concerns and demands for a better environment (Tierra Digna et al. 2015). Another outstanding case of community engagement in artistic production is the painting of a mural summarising the forced resettlement of the inhabitants of a small village called El Hatillo, owing to a health emergency caused by coal dust. The mural covers the walls of the local school. By contributing to its creation, children from the village were able to participate in a critical community discussion from which they otherwise felt excluded. This avenue of empowerment subsequently continued through music, theatre and painting activities that the children used to depict their own concerns about the resettlement plan. The creation of this piece is also the topic of another documentary film called El mural en el Hatillo (The mural and El Hatillo) produced by Fundación Chasquis, a media collective that focuses on social projects and helped to boost awareness about the resettlement.

A final example of a sophisticated use of cultural restoration is the construction of a collective memory for La Guijara in a document entitled Memoria y transformaciones territoriales en la comunidad de Las Casitas (Memory and territorial transformations in the community of Las Casitas), which covers the history and ethnoecology of the place and the sociocultural traditions of the Afro-descendent communities damaged by coal-mining activities and that were also forced to resettle. The social cartography embedded in the document created a vision of rurality that served as a counter-narrative to the technical document on how the resettlement should be carried out according to the mining company (Cuenca Casteblanco et al. 2017) .

The arts as a space of encounter – No Coal in Oakland

Oakland is a major West Coast port city in California, and the fifth largest container port in the United States in terms of cargo volume. In June 2016, after a massive campaign entitled No Coal in Oakland, the Oakland City Council voted to ban the handling and storage of coal and coke at the city’s terminals, effectively blocking shipments of coal from the Port of Oakland(Rossof 2016). This ban was imposed in response to plans initiated in 2013 to expand the port infrastructure to facilitate exports from coal-mining operations based in the USA, especially in Utah. Activists, council members and residents opposed the project based on arguments invoking environmental justice, public health, labour and religious principles, centred around the harmful consequences of coal dust in an already over-polluted city. Later, the developer sued the City of Oakland in an attempt to overturn the ordinance banning the handling and storage of coal. The legal case is still ongoing (Veklerov 2018).

Artistic activism was a key component of the anti-coal campaign in Oakland. A design by Jon Paul Bail united supporters of the No Coal in Oakland campaign, being printed on t-shirts, posters and banners displayed on houses around the city and projected onto emblematic buildings. That image bolstered a collective identity in a movement characterised by a wide range of demographics and political leanings. Cultural workers from a supporting group called Occupella rewrote popular songs, such as the Everly Brothers’ single Bye Bye Love, turned into Bye Bye Coal, which everyone could learn and sing at public events and demonstrations.

These and other artistic practices reinforced a sense of collective achievement that ended up in a historical ban on coal exports from the Port of Oakland. Young people and children of colour played a critical role in keeping the movement alive, particularly after the case went to court. Incidentally, actions by youngsters were always accompanied by or consisted of the artistic expression of their views and ideas, either in street performances, chants or various forms of painting. Demographic inclusiveness was a direct outcome of the use of artistic expression in this case (Sanz/Rodriguez-Labajos 2019).

Clashes over coal go through a number of different stages, including the pre- and post-conflict situations. The identities, landscapes and politics associated with such conflicts are represented in artistic and audiovisual creations in many different ways, to educate people, seek out and present the truth, bring critical attention to the reasons underlying a conflict, promote a physical transformation, politicise local community spaces by engaging people and organising events, preserve memories, foster remembrance and heal.

In the cases presented here, artistic creation turns out to be critical in situations of extreme power imbalance. From the democratic standpoint, artworks twice played a major role in rethinking democracy.

The first, more ethical case, questioned the democracy of material transformations pushed through by corporate interests, a point emphasised by Lee and Han (2019) and Malone (2018) in an urban gentrification context. Even when the operations involved are within the law, material transformations entail structural changes to people’s livelihoods (affecting health, infrastructure and productive capacities) that communities can end up perceiving and highlighting when it is already too late. Community action groups in both Colombia and Oakland felt marginalised by mainstream discourse concerning the coal commodity chain, due to fears, economic circumstances or demographics. Yet via the arts these groups found a way to express their ideas effectively to the affected communities, lifting a veil on their exclusion and suffering.

The second case also involved the use of arts to expand democratic possibilities in the face of dominant structures (Fusco 2018), revealing three crucial contributions by the arts in anti-coal struggles: educating people about democracy, organising the community and portraying underrepresented groups’ experience of power. For instance, an early use of creative activism in Oakland involved educating residents about the risks of the planned coal terminal as well as the opportunities for officially opposing the project. Artworks and performances in public settings engaged the community engagement and organisation, mustering support from diverse demographic groups and communities of justice. The arts play a particularly important role in politicising subjects that are often neglected in such conflicts, e.g. the impact on children. This point was also apparent in the Colombian case study. For the youngest participants, expressing their views though art gave them their first ever experience of power relating to a matter of public interest. But not only children were initiated into the languages of action and empowerment. The Colombian case study clearly showed how voices silenced by fear of direct violence or an extreme power imbalance when using other forms of advocacy, such as public demonstrations, can be heard via artistic or cultural expressions.

Of course, these are just some of many more examples of artistic expression and case studies that could help us understand the role by cultural practices, the arts and multimedia in transforming environmental conflicts. Further research is definitely required. Currently, the CLAMOR project (Environmental conflicts through the lens of artwork and multimedia in waterscape transformations, MSCA-GF-797444) is helping to review these types of material in water-related conflicts around the world.

Fusco, C. (2018). On being sick of humans in a post-human world: Toward a queer vegan methodology, in: Gallagher, K. (ed.), The Methodological Dilemma Revisited. Creative, Critical and Collaborative Approaches to Qualitative Research for a New Era. Routledge, 129–152.

Malone, N. (2018). Culture as contradiction in urban regeneration. Sanitization, commodification and critical resistance in Liverpool One, in: Krit. Kult. 30/31, 228–245.

Sanz, T./Rodriguez-Labajos, B. (2019). Does artistic activism change everything? Strategic and transformative effects of arts in anti-coal struggles in Oakland, CA. Manuscript.

The Guardian/Global Witness (2018). 197 environmental defenders have been killed in 2017 while protecting their community’s land or natural resources, in: The Defenders, available at: https://www.theguardian.com/environment/series/the-defenders (27 March 2018).

Beatriz Rodríguez-Labajos is an ecological economist and researcher at the Institute for Environmental Science and Technology of the Autonomous University of Barcelona (ICTA-UAB). She is also a Marie Sklodowska Curie Researcher at the Energy and Resources group of the University of California Berkeley (ERG-UC Berkeley) and member of the GWG Beyond Development.