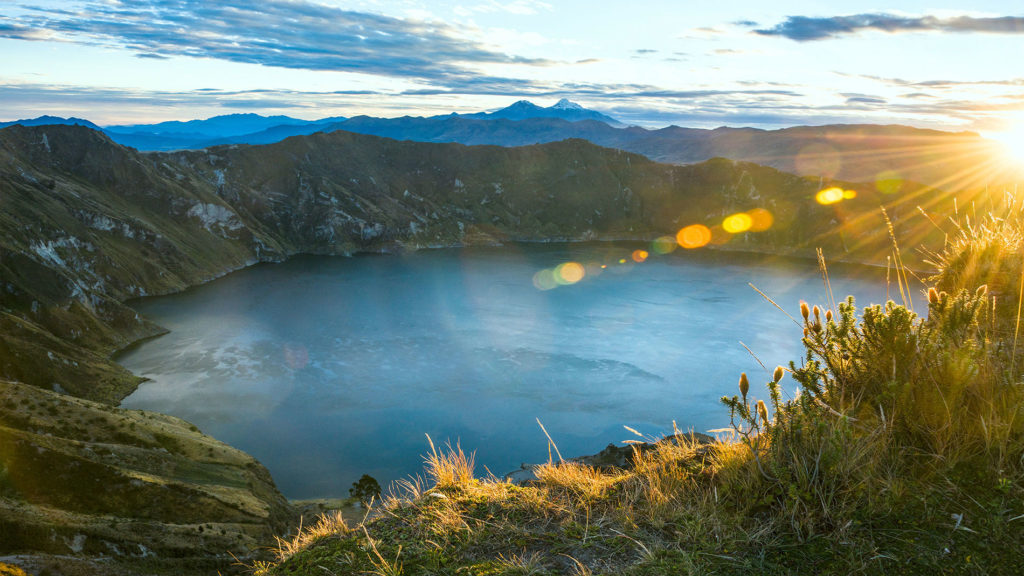 Ecuador: A victory against mining, and a dispute around meaningful policies of the left

On Sunday 7 February 2021, not only presidential elections took place in Ecuador. Cuenca, the third-largest city in the South American country, voted against a series of mega-mining projects in the headwaters of five rivers that supply the urban area with water. In the area, which is directly adjacent to a national park that has been declared a Biosphere Reserve by UNESCO, there are over 4,000 large and small bodies of water in the sensitive Páramo ecosystem, which acts as a reservoir in the Andes. Nevertheless, corporations from Canada, Australia, Peru, Chile, etc. had already been granted a total of 43 concessions for the mining of various metals. Fourteen grassroots organizations had launched the referendum, approved by the Constitutional Court in September 2020, via the Cuenca City Council. On Sunday, over 80% of the electorate voted in favor of a ban for industrial mining in this part of the Andean highlands. A clear democratic mandate in line with the 2008 constitution, which stipulates the rights of nature.

Since the result of the referendum is legally binding under the constitution, the next president will have to implement it. Many of the 16 presidential candidates had clearly opted for an expansion of mining in the election campaign in order to lead the country out of the economic crisis. Only one of them has spoken out clearly against mining and an expansion of the oil frontier in the Amazon region: Yaku Perez Guartambel, the candidate of the indigenous movement and its political organization Pachakutik.
The presidential election will not be finally decided until a final ballot on April 11th. The political heir to ex-president Rafael Correa, Andrés Arauz, who received 32.2% of the votes in the first round, will certainly take part in April. But who will be his opponent is still fought over: after 99,31 % of the votes had been counted, Perez Guartambel (20,10%) was just ahead of the neoliberal banker Guillermo Lasso (19,50%) with 0,6 % of the votes – a tight scenario which still can bring surprises.

For the first time in the country’s history, an indigenous candidate who comes from grassroots organizations has a chance of winning the election. This is already an enormous symbolic success for the indigenous movement of Ecuador, which last made headlines in October 2019 with an uprising against the liberalization of gasoline and diesel prices and the current Moreno government’s neoliberal policies. If Perez actually makes it to the final ballot, the election campaign will confront two different interpretations of what is defined as left in Latin America: one, a populist and authoritarian left in the wake of Rafael Correa who was in power from 2007 to 2017 and relied on an expansion of extractivism to finance infrastructure modernization and social programs. These programs promised more equality, but at the price of the destruction of nature and a de facto restriction of democratic rights. And two, an intercultural, plural, and ecological left that primarily appeals to the younger generations, puts issues such as climate change and the preservation of the rainforests at the forefront and refers to the great indigenous movement of the 90s and their communitarian form of politics. In this sense, the surge of Perez, ex-prefect of Cuenca, brings a breath of fresh air into the stale polarization between the old progressive left (represented by Arauz) and the most reactionary right (represented by Lasso) in a region in much need of political innovation.

But a broad international defamation campaign against Yaku Perez has started right away on election night, using media and international structures installed in previous years around the vision of a ‘socialism of the 21st century’. Especially Venezuela, Bolivia, and Ecuador hat officially proclaimed to engage in a renewed socialist path during progressive governments in the first one and a half decades of the 21st century. This new variant of socialism, unfortunately, showed to have inherited some of the less desirable features of the 20th-century socialism, like a top-down and a rather authoritarian approach to transformation with a central role for the governing party, a centralization of state power overriding necessary checks and balances, and intolerance toward dissent which was often criminalized and judicially persecuted. This led to a climate of polarization which suffocated all the transformative energy which had grown in organized society during the plural anti-neoliberal struggles of the 90s and early 2000s and allowed for a silent return to free trade agreements and elite-friendly economic politics. Especially the expansion of extractivist and mega-project oriented modernization politics met increasing resistance from indigenous and peasant organizations, as well as affected communities. But also students, workers, and feminist organizations opposed them for manifold reasons. As some Ecuadorian organizations of this other, plural left express it in a recent open letter:

“The left is not a subject, a party, a movement, a government; It is a permanent human mobilization that reinvents and transforms society in search of the defense of life, affirming and expanding human dignity, justice and freedom without attacking other species and damaging the planet. (…) Ecuadorian progressivism was left when back in 2006, it expressed a social mobilization that sought to build a destiny different from that marked by the patriarchal and colonial capitalism prevailing in Ecuador and Latin America. However, at the moment that, contrary to expressing this social mobilization, it sabotaged it, suffocated it, persecuted it, silenced it, it ceased to be left. When the left is conservative, it ceases to be mobilization and social desire and becomes a party (Alianza País) with an ideological letterhead (Citizen Revolution) and a caudillo (Rafael Correa) that contains and destroys resistance and social mobilization, and stops history in its reinvention of more pleasant human worlds.”

Lately, former Ecuadorian president Rafael Correa, correista presidential candidate Andres Arauz and former Bolivian vice-president Alvaro García Linera played a role in the creation of a Progressive International, a plural global coordination space thriving toward systemic transformation, which unfortunately has taken sides in the ongoing harsh dispute about the definition of what is left in Latin America. Now, adding a new chapter to this same dispute on all sort of platforms, a wide range of arguments is deployed against Yaku Perez describing him as a coup-supporting, CIA-backed, imperialistic, oligarchic, and right-wing ecofascist or, alternatively, a greenwasher, if they do not dive into plainly racist arguments to delegitimize him. The campaign clearly triggers all the classical topoi which had helped the traditional left to construct a black and white, simplistic worldview during the Cold War. This strategy of aggressive polarization not only makes it impossible to engage seriously with Perez’s proposals for a future government, leaving Arauz with the monopoly of being “the leftist candidate” for the second electoral round by all means. It also avoids any critical engagement with or learning from the failure of progressive politics during its hegemony in recent Latin American history. But most importantly, it distracts from the really important themes that are at stake today, regarding new political strategies to face a multidimensional crisis (which includes political representation and liberal electoral democracy). It curtails any impulse to collectively co-create new societies in an open political space that allows trial and error and plural deliberation. The sterile you-are-either-with-me-or-against-me rhetoric closes the political space of creativity and spreads fear instead. It totally avoids engaging in a profound discussion about what meaningful leftist politics means today. The future we need will not be built on one candidate, anyway, regardless of his or her political orientation, but in a fertile interaction between strong social organizations and governments who learn to listen to their bases. In this sense, the open letter from Ecuador states:

The vote for Yaku Perez and the result of the Cuenca referendum shows that a significant share of Ecuadorian society shares these concerns. A new politics of the left both in Ecuador and Latin America must reconnect with the social effervescence of the 90s and early 2000s. It cannot be based on a triumphalist return of Socialism of the 21st Century but must acknowledge and learn from what has gone wrong during these years – a necessary auto-critical discussion that could also inspire many other transformative processes in the world. It must refocus on the rights of nature, which the policies of this ‘conservative progressive’ left have undermined when they were in government. Ecuador is one of the countries with the greatest biodiversity in the world. In times of massive species extinction, an economic policy course that relies on more mining and oil production could have incalculable consequences far beyond the small country. The pandemic has led to an expansion and acceleration of nature-destroying activities in a legal gray area throughout Latin America, as environmental controls have been largely suspended. At the same time, Covid-19 has made it very clear that the advance of capitalist overexploitation into fragile ecosystems harbors great dangers for humanity. In Cuenca, an entire urban population, and not just a rural community directly affected, has spoken out against mining. This popular decision paves the way to finally discuss the urgently needed fundamental change in economic policy, which puts life-sustaining aspects such as food sovereignty and clean water above the imperatives of the world market.

Miriam Lang is a Professor of Environmental and Sustainability Studies at the Universidad Andina Simon Bolivar, Quito