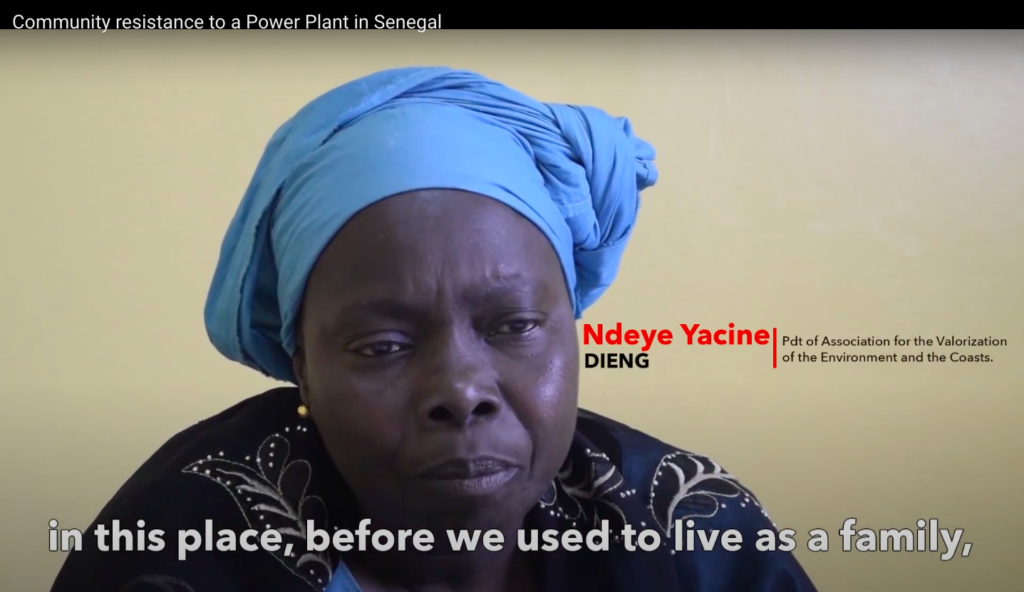 Community resistance to a Power Plant in Senegal

A fisher community leaving in Bargny at 15km from the city of Dakar is facing the consequences of an industrialization program of the Senegalese state praised to be the way for economic emergence. The socioeconomic change and mutations resulting from the series of projects have deep impacts on the community’s livelihoods.

The economy of Bargny employing more than thousand fishermen and at least one thousand women drying, and packaging fish products is threatened. The SOCOCIM Cement industry was granted of 241 ha land, the creation of the Bargny-Sendou mineral and bulk port occupies 650 ha and the urban Pole of Diamniadio stands on a1,644 ha. The installation of the future mining port stands as a real threat for the fishermen. Bargny is also hit by the global warming and its coasts belong to the most impacted in Senegal with a sea rise level of 2 Meters. Families are affected while some of them are displaced and their family structures are destroyed.

Today a main part of the youth sees the illegal migration as the alternative. The skepticism of the communities is based on the contradiction between economic growth praised by the State and the threatening of their livelihoods. When land grab and Meer grab meet the no involvement of the communities to the decision-making processes, there is no democratization’s process.

A resistance movement is organized to defend the rights of the communities through campaigning and denouncing the industrial aggression and the luck of respect of their economic, social and cultural rights. Their complain to the African Development Bank (ADB), the West African Development Bank and BOAD and the Dutch Development Bank (FMO) have been approved and todays in spite of the construction of Sendou power plant, the Senegalese government has decided to stop the coal project.

Ibrahima Thiam is with Rosa Luxemburg Stiftung in Dakar and works on natural resources, vulnerabilities and alternatives, and Climate change.